Meanwhile, the Oil is Still Flowing--and Not in a Good Way 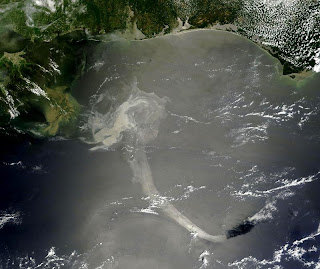 On 20 April an oil rig in the Gulf of Mexico, exploded, burned and sank with the loss of several workers.  Unfortunately this tragedy has yet to end.  British Petroleum (BP), the owners of the rig have been trying to staunch the flow of oil spewing from the broken well line--with no success.  Now millions of gallons of crude oil has polluted America's Gulf Coast beaches, and if the leak continues, could affect the east coast, thanks to the Gulf Stream.

Pundits and critics have also been discussing the Obama Administration's lackluster response to this and calling it "Obama's Katrina."

Fox News has a running time line of this disaster:

Email ThisBlogThis!Share to TwitterShare to FacebookShare to Pinterest
Labels: Emergencies in the News