Damn the Israelis and Full Speed Ahead... 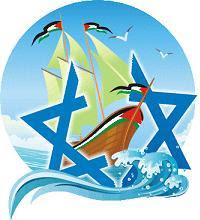 (Image downloaded from the Middle East Media Research Institute [MEMRI] who, in turn, obtained it from a Yemeni website).

While Americans were honoring Memorial Day, a flotilla of alleged humanitarian activists tried to run the Israeli blockade around Gaza.

Ralph Peters points out, in the NY Post, the condemnation of Israel from the "usual suspects" dwarfs any concern over Iran or North Korea:

Victor Davis Hanson (VDH) follows through and points out some of this century's recent atrocities that the world did very little about, and yet, is going full steam ahead to condemn Israel:

And Bare Naked Islam has some photos of "impliments of peace" used by the Gaza Yatch Club Members, along with their terrorist affiliations:

MEMRI's Report #2990 details the martyrdom preparations made by some of these alleged activists:

Meanwhile, FOX News reports another ship, set sail from Malta and is supposedly en-route to Gaza:


One of my friends made an extensive comment on this:

I really wonder about the extent to which the TGS [Turkish General Staff] can influence domestic politics in Turkey anymore. Granted, I know NOTHING about Turkey but we all saw the reaction from people who should know better when the Honduran military stepped in (at the behest of their legislature and courts if memory serves) to support and defend their consitution against an executive who was trying to set himself as president for life.


The manner in which the TGS has served as a backstop for secular democracy in Turkey may not be textbook democratic politics or civil-military relations but I tend not to question things that work and in a country like Turkey where democratic institutions are not as strong as they are elsewhere, I've always viewed the situation as imperfect but necessary and better than the alternatives.

I can just see the reaction from the usual suspects from the White House on down if the TGS stepped in at some point to put the ship back on even keel. We'd here all sorts of blather about the military destorying Turkey's fragile democracy and how that sort of behavior just doesn't fly in the 21st century, blah, blah, blah, blah...

To which Comrade Karla replied:

Good points—the people I worked with in the 80s, especially those involved with the Turkish aspects of NATO, well understood the role of the TGS; however, the current admin will sh*t in their pants if the TGS does what they’ve done in the past, that is act as the guarantor of secular democracy. It might be too late; the TGS could still act but not with the effectiveness it might have had 5 or 6 years ago when this bozo took office and started sending out serious warning signs—that were largely ignored, IMO.
Posted by Ted Henkle at 11:30 AM