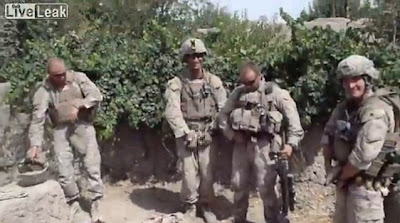 Speaking of having a lack of empathy, (see previous post), several US Marines could be facing charges because they were filmed peeing on the bodies of several Taliban terrorists.
Okay, I admit it--I have no empathy for anyone trying to kill Americans.  Most of my like-minded friends don't either.
Comrade Karla Sr. put it best:
I really hate war. War is not civilized. Any persons subject to involvement in personal combat, especially front line troops, are supposed to hate the enemy. Pissing on enemy corpses is only one manifestation of some troops who survive bitter fighting. If our leaders do not like war, they shouldn’t have them. If, for whatever reason the US must get involved in a war which involves sending anyone into a firefight with a tough enemy, for God’s sake don’t expect them to act like missionaries. Encourage them to be mean. In war, you want such people to be heartless determined killers who hate and detest the enemy. Be happy some of them manage to have piss in their bladders after a fight.

In the second war, US troops behaved cruelly, especially in the Pacific Theatre. It’s happened in every war. It’s perfectly normal to abuse the enemy; it’s part of the game. Many, perhaps most, troops who get blood in their mouths manage to ‘turn it off’ after a fight; some do not, Just don’t take photographs and don’t brag about it!

A couple other comments followed:

Wonder if Karzai feels the same way about abuse/murder of underage women?

Pissing on dead Taliban sounds fine to me. I’d poop on them, too, for good measure.
Posted by Ted Henkle at 1:27 PM