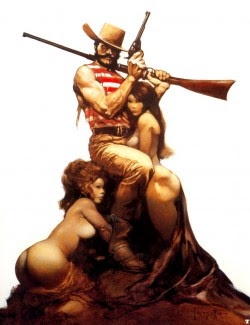 (Image:  Flash for Freedom! by Frank Frazetta)
Flashman's creator, George MacDonald Fraser rolls-in on political correctness in his last testament.
This comment, near the end, struck a chord with me:
I was made aware that among the middle-aged and people in their 20s and 30s there is a groundswell of anger and frustration at the damage done to Britain by so-called reformers and dishonest politicians who hardly bother to conceal their contempt for the public's wishes.
I mentioned to my friends I've read other articles and polls, stating conservatives actually outnumber liberals.  But we're led to believe the opposite is true.  In response, one of them replied with a link to a speech Charlton Heston gave at Harvard in 1999:  Posted on American Rhetoric.
The common theme between these two pieces and from others I've read, is that true liberals are actually a minority.  Unfortunately, they have their hands on the levers of power.
To which another friend made this excellent observation:

The reason the left has many levers of power is that they see government as the solution for our woes, therefore their elites gravitate there while conservatives favor personal achievement, usually in business. Thus, we're stuck with them running many important aspects of society in numbers that do not reflect their true proportion in the population.

Which leaves military service as an odd subset, instead of a reflection of society as a whole.  Where's Heinlein when you need him?

The blogger I've been loosely following called Ulsterman, who has occasionally interviews the "Washington Insider" (supposedly someone in the Obama White House) interviewed someone else who claimed that the Administration wants to try to unionize the military, apparently to try to turn a pro-GOP voting bloc into a pro-Dem one.  Now, I don't necessarily believe it's something they would try, given that it would fail miserably, but I can see the appeal to the Dems. Plus, some Euro-armies are unionized, so it's not unprecedented.  I do find it comforting that the military is the most respected insitution in the US while being one of the most conservative.

I recall some pretty harrowing photos in the 70s of the "unionized" Dutch army...they seem to have gotten away from the long hair and generally silly demeanor, though.  Increasingly I wonder what this admin won't stoop to. While I skipped the latest address to the Supreme Soviet, it was clearly more of the "do what I want my way or you're just an obstructor" nonsense. With lots of spending.  Media nonsense will no doubt ensue! 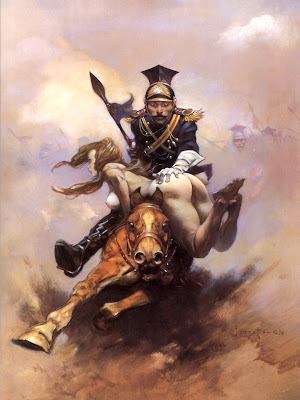 (Another Frazetta image:  Flashman at the Charge)
Posted by Ted Henkle at 1:35 PM