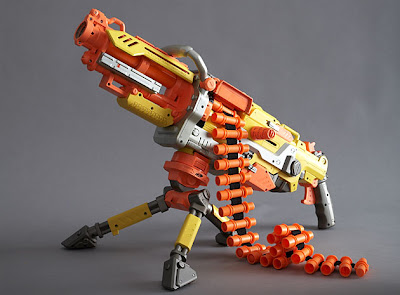 ...from Nerf Guns?
God Almighty! If I were I kid today, I'd be asking Santa for one of these babies pictured above.  When I was a kid we relied on cap guns and a rudimentary honor system to determine whether we were hit, or not.
Unfortunately for kids in Buffalo, NY, the wussification of America continues.  A group known as FATHERS (Fathers Armed Together to Help Educate Restore and Save) are in cahoots with a pizza joint to buy back toy guns from kids.
I first heard this story from a snippet on FOX NEWS's show The Five.  Going on-line, I found the story on Weasel Zippers.
Rob Port, posted this story on the Say Anything Blog, along with some intelligent comments on why this is such a stupid idea.
A friend made a couple keen observations:
A toy gun today, a real gun tomorrow...

From that logic we should stop buying kids stuffed animals because if you give your kid a teddy bear or a stuffed tiger he'll think that the real life versions of these beasts are soft and cuddly as opposed to large carniverous animals and whatever you do, don't get your kid a stuffed racoon because most of the wild ones have rabies.

So what will the FATHERS group do with the 100 or so toy guns? “We plan on burying them in the next six months,” Lane said. “We’re going to get a coffin and put the guns in the coffin, and we’re going to close that coffin and pray.

Where I come from that is called littering...

While Comrade Karla Sr found an opportunity to inject his sense of humor into the subject:

Yeah, the Hutus and Tutsis in Rwanda probably grew up with a plethora of rubber knives.  Who knows what havoc they would have wrought if they grew up with Nerf Guns?
I know it is a matter of historic record that the Zulus gave their children rubber spears at a early age. That's why they were so bad ass.  And the Sioux gave their kids little bows with rubber arrows. If they hadn't done that the Little Bighorn might have had a very different result. 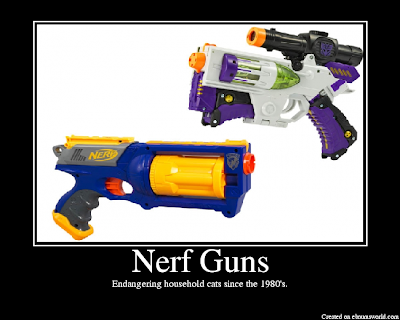