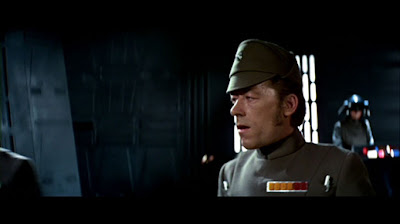 (Image from: Star Wars--Episode IV, A New Hope)
One of my friends posted this interesting editorial from The Chicago Tribune by Steve Chapman.  He also included quotes from this famous scene in Star Wars.  I've copied part of it here, because I find it strangely appropriate.

In additon to the Star Wars reference, here's his intro, which I think is spot-on:

...While on the surface that [Obama bowing out] sounds great, I would bet any amount of money that, if he did drop out, Hilary would run, and she would trounce any GOP competitor currently in the running.  I don't see this happening at the moment, but he could have an LBJ moment quite easily...


Another friend chimed in with:

I found it particularly telling as well that it came from the Chicago Tribune. Talk about rats fleeing a sinking ship.

My Star Wars friend later sent us a couple articles from Verum Serum, regarding the latest assault on Obama's popularity--"Solyndragate."

The first, comments on George Kaiser's possible involvment in the scandal.  While the second, rolls-in on Michael Grunwald's defense of Our Dear Leader.
Posted by Ted Henkle at 10:20 PM