Closing Off the Oceans and Shorelines 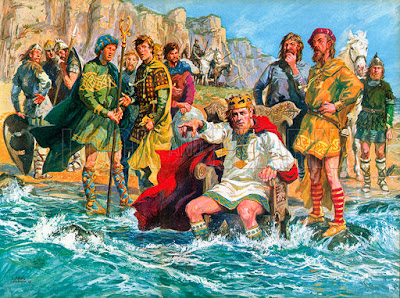 (Image:  King Canute at the shore)

Sometime during the 1th Century, it is said that King Canute demonstrated the limits of kingly power to his courtiers in a vain attempt to hold back the tide.

Fast forward to the 21st Century, our very own "King Barack" and his cronies are attempting to close down any strip of federally-funded public land.  The supposedly latest outrageous stunt to "make life dificult for people"--prohibiting fishing in the 1,100 square miles of Florida Bay, part of Biscayne National Park.

I'm not sure if I believe this one, but after the World War II Monument and the Normandy Beach Cemetary closures, who knows?

In any case, Mark Steyn exposes just how broken our legislative system is with his commentary on the simulacrum shutdown. 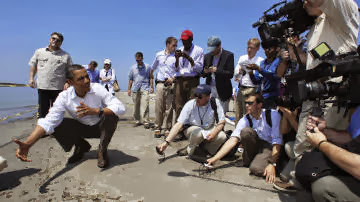 Obama:  "You see, unlike the feeble King Canute, I CAN hold back the tide."

Okay, the above picture is actually of Obama chatting-it up with reporters during the Deepwater Horizon oil spill in 2010, but the imagery was impossible to resist comparing it with King Canute's beach-side excursion.