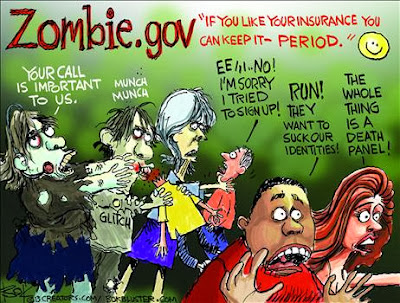 (Image by Chip Bok)
Ever since Obamacare's attempted launch blew up on the pad, there's been a slew of horror stories about rising healthcare costs, getting kicked off their current plan and hardly anyone being able to log on to the Obamacare website.  The list goes on and on.

Despite Jon Stewart's comment that there's no way the Democrats can "spin this turd," there's still some true believers attempting to do so, as Megyn Kelly found out as the interviewee tries to drown her out.

Just like the government shutdown, Obamacare's failure to launch is the Republicans fault.  Yes, somehow magically, the very same bill in which no Republican voted for, are the ones to blame for this monumental fiasco.

And speaking of magic, Mark Steyn rolls-in on the magical thinking (and technical ineptitude) that formed the foundation of Obamacare.

The Diplomad also adds to the epitaph for the Republic... 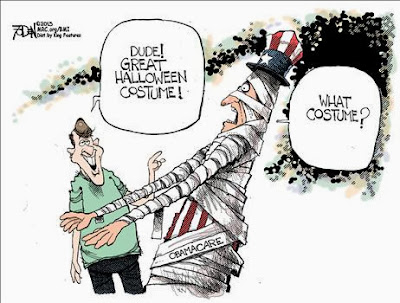 (Image by Glenn Foden)
...we're left with the only option of letting the Obamacare Train wreck, in order to recover from the disaster.  Provided Our Dear Leader doesn't nationalize the healthcare industry outright.
Which may have been his plan all along.
Posted by Ted Henkle at 7:30 PM