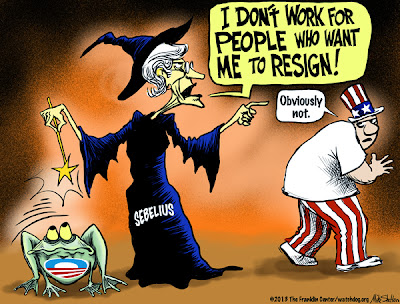 (Image from The Franklin Center)

Last week, Republicans and the conservative masses called for Sebelius's resignation.  She rebuffed the hue & cry with I don't work for people who want me to resign.

Technically she's right.  She's not an elected official and is part of Our Dear Leader's "top people."

That being said, this illustrates the super-sized problem with super-duper sized federal government:  Unelected bureaucrats making decisions with no accountability whatsoever to "We the People."

What really caught my attention was third paragraph to the FOX article link, which reads:  Sebelius said "no one is getting fired" over the liches and that her main focus is to get the website up and running. 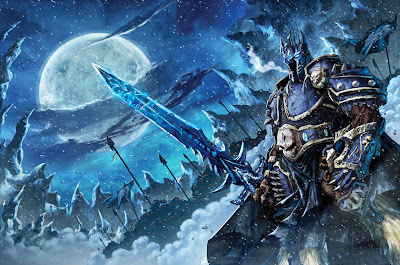 It's no wonder then, why the Obamacare website is such an ungodly mess--so much so, that Madame Sebelius is now conjuring a batch of CYA spells to keep the pitchfork-wielding villagers at bay.

Just one lich is enough to inflict a TPK upon a band of the mightiest of heroes.  A whole coven of them wrecking havoc in cyberspace is a harbinger of the Apocalypse.

Of course, a more mundane explaination is that "liches" is a typo, or misquote for the run-of-the-spin "glitches" Team Obama and the media keep bandying about.

Or--was it a Freudian Slip by Madame Sebelius?


Makes one wonder what other unholy terrors our self-proclaimed "most transparent administration in history" has unleashed upon mankind.
Posted by Ted Henkle at 7:30 PM