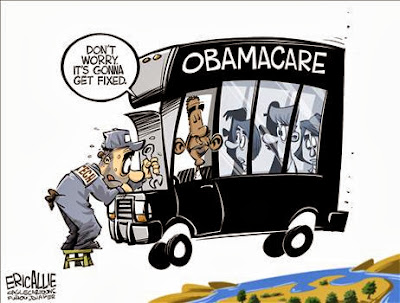 Our Dear Leader is a man of few over used words.  "Let me be clear" springs to mind.  Victor Davis Hanson ("VDH") points out that "unacceptable" is also one of his oft-used words.  The "glitches" in the Obamacare rollout are about as unnacceptable as violence in Egypt, chemical weapon use in Syria an a nuclear-armed Iran.

Team Obama is still trying to claim the reason for the failure-to-launch is due to the system being overwhelmed by eager enrollies.  But even Jon Stewart, who's not known for defending conservative values, calls them on it.  I predict  "...can't spin this turd..." will be the most famous anti-Obamacare cat phrases.

I haven't attempted to sign up because I don't want to lock-up my computer by waiting... 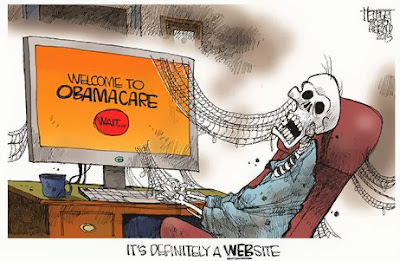 As Obama's mouthpiece passes the buck on the tough questions, The Diplomad shows just how incompetent Team Obama really is.

Even Yahoo! News isn't buying the line that "top men" are toiling away to fix the website(s).
Unfortunately, the rolling trainwreck keeps rolling... 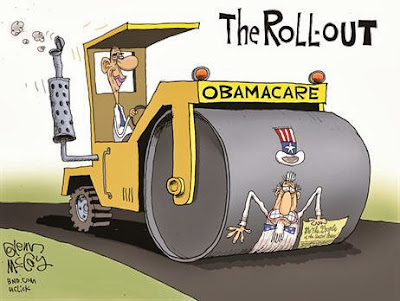 (Image by Glenn McCoy)
Posted by Ted Henkle at 7:30 PM