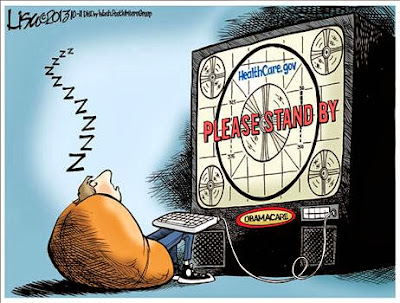 (Image by Lisa Benson)
As our broke and broken government lurches toward tomorrow's Debt Ceiling, another major story is being ignored by the liberal media:  The Obamacare trainwreck.

A couple weeks ago, Health and Human Services Head Honcho-ette, Kathleen Sibelius, received a grilling from Jon Stewart on his Daily Show.

Then a few days ago, David Letterman rolled-in with some jokes about Obamacare's disastrous startup.

Neither of these guys are known for their Tea Party sympathies.