"Once More Into the Breach Dear Friends!" 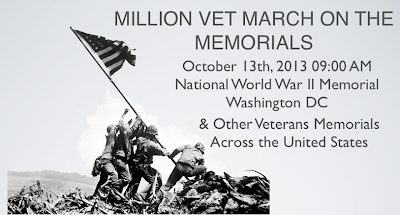 A couple of days ago on Facebook, I half-jokingly posted that we should start an Occupy National Parks Movement.

Yesterday I discovered some veterans took this idea seriously and are planning a Million Vet March on the Memorials.

My thoughts and prayers are with these folks.  I'll be working that day and will be unable to show up at any of my local/regional Rally Points, so I hope one million people DO march on the memorials.

Barrycading the national parks is vindictive shutdown theater.  Not only that, the Obamunists are certainly playing favorites.  While vets are locked out of their own memorials, protestors for immigration reform were allowed to host a rally on the "closed" Washington Mall.

As a friend of mine posted on Facebook:  Who would have thought National Park Service (part of the Department of the Interior) would be the Federal Government stormtroopers.  More specifically--stormtroopers for the Democratic Party.

Back on Facebook, I got into a long discussion with a high school alum over this.  He believes this is mostly (entirely?) the fault of the Republicans.  While it's true Republicans share a debatable amount of blame for the shutdown, I kept pointing out that they're not the ones controlling the Executive Branch.

The National Park Service and every other federal agency take their marching orders, directly, or indirectly from the White House--currently occupied by Obama--with a parenthetical "D" at the end of his name.

Prior to all the shutdown shenanigans I had a lot of admiration for the NPS.  But now?  I agree with Mark Steyn on this.  When a supposedly apolitical agency becomes the paramilitary wing of a political party, it should be abolished. 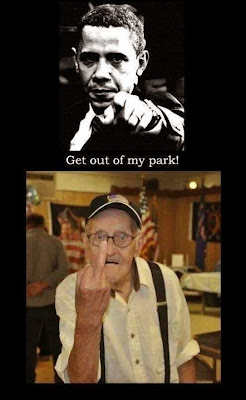 While I tried to coin the phrase, Occupy National Parks, Michelle Malkin does one better and issued the call-to-arms to Occupy America.
Posted by Ted Henkle at 7:30 AM