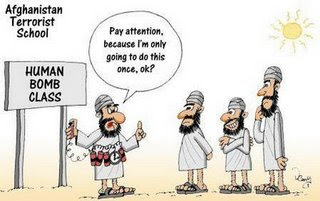 From the Iowahawk...
Apologetic Mumbai Killers: "We Didn't Get the Memo About Obama"MUMBAI - Ajmal Amir Kasab, the sole surviving member of the 10-man team of Pakistani gunmen that left hundreds dead or wounded after a bloody three day rampage in Mumbai, today blamed the mayhem on an "email mixup" that left him and his colleagues unaware that Barack Obama had won election as President of the United States.
"What? Oh bloody hell, now you tell me," said Kasab, as he was led away in handcuffs by Indian security forces.
Kasab, 21, apologized to Indian President Pratibha Patil, explaining that no one in his group had known about the recent U.S. election results."Boy, talk about having egg on the face," said a visibly embarrassed Kasab. "If we knew Bush was on his way out, obviously we would have called off the crazy random baby-shootings and martyrdom stuff, and signed on with the Peace Corps or Habitat for Humanity.
At this point I guess all I can say is 'my bad.'""Seriously, I can't even begin to tell you how shitty the whole situation makes me feel," he added dejectedly. "Don't get me wrong, I'm as thrilled as everybody else to find out Barack won the election, but this moment is always going to be bittersweet knowing that all those shootings were tragically unnecessary. Not to mention the six weeks I wasted in training camp."Kasab, who is personally suspected of killing over 30 victims at point-blank range in a posh Mumbai hotel, was at a loss to explain how he and other members of the terrorist assault team remained unaware of the historic U.S. election results that many American analysts predicted would lead to an immediate and permanent outbreak of rapturous harmony and transcendent brotherly love throughout the universe."
Jeez, I'm... I don't know, I just never got any kind of memo," said Kasab. "The ironic thing is that just the other day, when we were ritually shaving our testicles for final martyrdom, a bunch of us were talking about how great and symbolic it would be if the American infidels would only elect an handsome, articulate young African-American infidel. That way we could just lay down the suicide belts and scimitars and suitcase nukes and finally get involved in the positive aspects of community activism, like raising awareness for breast cancer research. Look, I know it's a cliche to point fingers at the IT department, but our email system really sucks. And it's hard to find a decent wi-fi hot spot in Northwest Pakistan.
"Tragically, though, it appears that internet connectivity was only the tip of the iceberg in a system-wide Obama news communication failure at Al Qaeda Headquarters.
"Obama won? Seriously?" said an astonished Abdul Aziz Qasim, Senior Media Affairs Director for Al Qaeda's Peshawar Office at an afternoon press conference announcing responsibility for the attacks. "I mean... you're positively sure of that?"
After a reporter screened a YouTube video for him showing Obama's election night celebration, Qasim angrily summoned his intelligence department."Have any of you seen this? Any of you?" shouted Qasim, jabbing at the laptop screen with his hook, as his staff awkwardly stared at their sandals. "Because it would have been nice to know about it TWO FUCKING WEEKS AGO."
"Can one of you idiots remind me why I pay you?" he continued. "Because all I know is that I'm the only one in this goddamn tent who ends up taking the heat from bin Laden and Zawahiri, and gets stuck doing the damage control caused by you stupid fuckups.
"Regaining his composure, Qasim said that Al Qaeda would work to make amends with victims of the Mumbai tragedy, including sending flowers and handwritten apology notes containing 1000 rupee ($12.65) PakMart gift cards to the surviving families of all 173 dead. Wounded victims are slated to receive a 50 rupee coupon good at participating Waziristan Fried Chicken restaurants."Ultimately, I know the 'buck stops here,' but I just want to remind everybody in the infidel world that the only gripe that we've really ever had with you is about George Bush," said Qasim. "There's just something instantly irritating about that guy, you know what I mean? It's that smirk, the way he says 'nuke-u-ler' and all that 'evildoers' crap. There's only so much you can take of him before you start flying planes into skyscrapers or bombing subways, or shooting Hindus, or beheading Thai school teachers, and what-have-you."
"Believe me, now that Bush is out of the picture we're just as upset about those senseless killings as everybody else, especially those of us who actually did the senseless killing," he added. "All we ask is that the Indian judges not take it too hard on Ajmal. The poor kid feels bad enough already. It's not his fault he didn't find out about the infidel elections, you know how hard it is to get a decent Verizon cell in Mumbai. Now that we're all on the same page again it would be a great time for all of us, believers and infidels alike, to put all the nonsense of the Bush years behind us and rekindle that beautiful peace and friendship thing we all had going on back in 2000."
"I know my wife is looking forward to another Florida vacation -- even though she'll have to drop a few pounds to fit back into her beach chador," Qasim joked. "She was only ten when we were there for our honeymoon."
"Oh, before I forget, let me finally send our belated congratulations to President-Elect Obama," said the Al Qaeda spokesman. "Let me also say we're very sorry for the snafu in Mumbai, and hope this won't put a damper on our negotiations for the peaceful return of Spain. We're cool, right?"
Posted by Ted Henkle at 6:44 PM