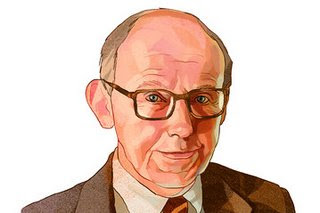 Samuel Huntington's controversial book Clash of Civilizations hit the bookstores just as I was entering grad school. It's probably the only book I vaguely remember compared to all the other dreary tomes we had to read.

My classmates and I, all members of the military at that time, didn't find anything controversial about his work. We thought he was spot-on right from the get-go.

Apparently this patriotic scholar passed away last week. He will be missed.

The last of Samuel Huntington's books -- "Who Are We? The Challenges to America's National Identity," published four years ago -- may have been his most passionate work. It was like that with the celebrated Harvard political scientist, who died last week at 81. He was a man of diffidence and reserve, yet he was always caught up in the political storms of recent decades.

"This book is shaped by my own identities as a patriot and a scholar," he wrote. "As a patriot I am deeply concerned about the unity and strength of my country as a society based on liberty, equality, law and individual rights." Huntington lived the life of his choice, neither seeking controversies, nor ducking them. "Who Are We?" had the signature of this great scholar -- the bold, sweeping assertions sustained by exacting details, and the engagement with the issues of the time.

He wrote in that book of the "American Creed," and of its erosion among the elites. Its key elements -- the English language, Christianity, religious commitment, English concepts of the rule of law, the responsibility of rulers, and the rights of individuals -- he said are derived from the "distinct Anglo-Protestant culture of the founding settlers of America in the seventeenth and eighteenth centuries."

Critics who branded the book as a work of undisguised nativism missed an essential point. Huntington observed that his was an "argument for the importance of Anglo-Protestant culture, not for the importance of Anglo-Protestant people." The success of this great republic, he said, had hitherto depended on the willingness of generations of Americans to honor the creed of the founding settlers and to shed their old affinities. But that willingness was being battered by globalization and multiculturalism, and by new waves of immigrants with no deep attachments to America's national identity. "The Stars and Stripes were at half-mast," he wrote in "Who Are We?", "and other flags flew higher on the flagpole of American identities."

Three possible American futures beckoned, Huntington said: cosmopolitan, imperial and national. In the first, the world remakes America, and globalization and multiculturalism trump national identity. In the second, America remakes the world: Unchallenged by a rival superpower, America would attempt to reshape the world according to its values, taking to other shores its democratic norms and aspirations. In the third, America remains America: It resists the blandishments -- and falseness -- of cosmopolitanism, and reins in the imperial impulse.Huntington made no secret of his own preference: an American nationalism "devoted to the preservation and enhancement of those qualities that have defined America since its founding." His stark sense of realism had no patience for the globalism of the Clinton era. The culture of "Davos Man" -- named for the watering hole of the global elite -- was disconnected from the call of home and hearth and national soil.

But he looked with a skeptical eye on the American expedition to Iraq, uneasy with those American conservatives who had come to believe in an "imperial" American mission. He foresaw frustration for this drive to democratize other lands. The American people would not sustain this project, he observed, and there was the "paradox of democracy": Democratic experiments often bring in their wake nationalistic populist movements (Latin America) or fundamentalist movements (Muslim countries). The world tempts power, and denies it. It is the Huntingtonian world; no false hopes and no redemption.

In the 1990s, when the Davos crowd and other believers in a borderless world reigned supreme, Huntington crossed over from the academy into global renown, with his "clash of civilizations" thesis. In an article first published in Foreign Affairs in 1993 (then expanded into a book), Huntington foresaw the shape of the post-Cold War world. The war of ideologies would yield to a civilizational struggle of soil and blood. It would be the West versus the eight civilizations dividing the rest -- Latin American, African, Islamic, Sinic, Hindu, Orthodox, Buddhist and Japanese.

In this civilizational struggle, Islam would emerge as the principal challenge to the West. "The relations between Islam and Christianity, both orthodox and Western, have often been stormy. Each has been the other's Other. The 20th-century conflict between liberal democracy and Marxist-Leninism is only a fleeting and superficial historical phenomenon compared to the continuing and deeply conflictual relation between Islam and Christianity."He had assaulted the zeitgeist of the era. The world took notice, and his book was translated into 39 languages. Critics insisted that men want Sony, not soil. But on 9/11, young Arabs -- 19 of them -- would weigh in. They punctured the illusions of an era, and gave evidence of the truth of Huntington's vision. With his typical precision, he had written of a "youth bulge" unsettling Muslim societies, and young, radicalized Arabs, unhinged by modernity and unable to master it, emerging as the children of this radical age.

If I may be permitted a personal narrative: In 1993, I had written the lead critique in Foreign Affairs of his thesis. I admired his work but was unconvinced. My faith was invested in the order of states that the West itself built. The ways of the West had become the ways of the world, I argued, and the modernist consensus would hold in key Third-World countries like Egypt, India and Turkey. Fifteen years later, I was given a chance in the pages of The New York Times Book Review to acknowledge that I had erred and that Huntington had been correct all along.A gracious letter came to me from Nancy Arkelyan Huntington, his wife of 51 years (her Armenian descent an irony lost on those who dubbed him a defender of nativism). He was in ill-health, suffering the aftermath of a small stroke. They were spending the winter at their summer house on Martha's Vineyard. She had read him my essay as he lay in bed. He was pleased with it: "He will be writing you himself shortly." Of course, he did not write, and knowing of his frail state I did not expect him to do so. He had been a source of great wisdom, an exemplar, and it had been an honor to write of him, and to know him in the regrettably small way I did.

We don't have his likes in the academy today. Political science, the field he devoted his working life to, has been in the main commandeered by a new generation. They are "rational choice" people who work with models and numbers and write arid, impenetrable jargon.

More importantly, nowadays in the academy and beyond, the patriotism that marked Samuel Huntington's life and work is derided, and the American Creed he upheld is thought to be the ideology of rubes and simpletons, the affliction of people clinging to old ways. The Davos men have perhaps won. No wonder the sorrow and the concern that ran through the work of Huntington's final years.

Mr. Ajami is professor of Middle East Studies at The Johns Hopkins University, School of Advanced International Studies. He is also an adjunct research fellow at Stanford University's Hoover Institution.
Posted by Ted Henkle at 12:25 PM