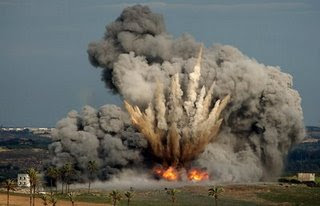 So far in the opening days, Israel seems like it is trying to avoid the mistakes made during the last Israel-Hezbollah War.

Here's a bit of advice from Bill Levinson, which generated a lengthy on-line debate about whether or not an aerial bombing campaign is truly effective:

Now that Israel has FINALLY retaliated against Hamas for Hamas’ ongoing litany of mindless violence and breaches of regional peace, it needs to heed the advice of the British air marshal who supervised the bombing campaigns of the Second World War. With regard to justification of the bombing campaign in the first place, just replace “Nazis” with “Palestinians” (easy enough) and the names of the Allied cities with those of the Israeli cities at which the Palestinians have fired rockets.The Nazis entered this war under the rather childish delusion that they were going to bomb everyone else, and nobody was going to bomb them. At Rotterdam, London, Warsaw, and half a hundred other places, they put their rather naive theory into operation. They sowed the wind, and now they are going to reap the whirlwind.

With regard to the advisability of using Israeli ground troops (who would suffer heavily in combat with guerrillas–house to house fighting is a combat soldier’s worst nightmare):

I do not personally regard the whole of the remaining cities of Germany as worth the bones of one British Grenadier.

The whole of Gaza is similarly not worth the bones of one IDF soldier, if bombing the place into rubble will end the conflict without ground combat. Civilian casualties are admittedly regrettable, but they are the responsibility of the Hamas terrorists who hide among civilians (often with the civilians’ consent and encouragement, because they support Hamas’ agenda of terror). Harris had some good advice about this too:

The aim of the Combined Bomber Offensive…should be unambiguously stated [as] the destruction of German cities, the killing of German workers, and the disruption of civilized life throughout Germany.It should be emphasized that the destruction of houses, public utilities, transport and lives, the creation of a refugee problem on an unprecedented scale, and the breakdown of morale both at home and at the battle fronts by fear of extended and intensified bombing, are accepted and intended aims of our bombing policy. They are not by-products of attempts to hit factories.

A similar bombing campaign by the IAF should similarly traumatize the population of Gaza to such an extent that the dazed and vacant-eyed survivors will never again think of lifting a finger to Israel, or being caught in possession of so much as a model rocket (let alone a Katyusha). Even if some might still be inclined to commit violence, they will not have the means to commit it because they will be struggling to find enough to eat in the rubble.

The above may sound harsh, but most normal people learn in kindergarten not to hit other people unless they want to be hit back. Most adults know that you don’t shoot at other people (even in the absence of police) unless you want them to shoot back at you. As stated by Harris, Nazi Germany did not understand this, or did not care, so England turned Dresden into a giant crematorium. Hamas clearly does not understand this either, so Israel is 100 percent justified in turning Gaza into a giant crematorium if that is what it takes to make the rockets and mortar shells stop.
Posted by Ted Henkle at 7:44 AM