To Salt or not to Salt? 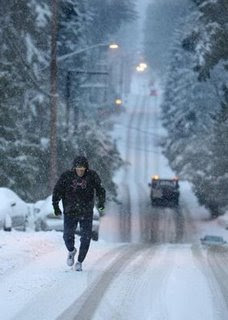 The City of Seattle has come under sharp criticism for failing to clear many of the streets. One of the main problems is that Washington State in general doesn't salt the roads to melt snow & ice. Instead WSDOT (WA State Dept. of Transportation) sands the streets to provide traction for motorists. The premise was that salt harmed the nearby waterways. However, now scientists & environmentalist are thinking differently.

After all, Puget Sound consists of salt water.

(This picture of a runner braving the elements in Sammamish was taken from the Seattle Times).

Salt vs Sand from the Seattle Times:
http://seattletimes.nwsource.com/html/localnews/2008554976_roads24m.html
Posted by Ted Henkle at 8:55 PM