Not Rubbing Salt in the Wounds 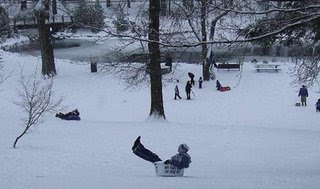 Ah! Remember as kids when winter was all about having frosty fun?

As adults winter looses some of its appeal when we have to excavate our vehicles from snowdrifts in order to get to work.

It's finally stopped snowing here in the Seattle-Tacoma area--for now. More snow, mixed with rain, is on the way though. And while the main highways are clear, many of the city streets look more like bobsled runs.

Apparently Seattle's on a "salt free diet" when it comes to clearing snow clogged roads:

Meanwhile, holiday travelers are still in "refugee status" and unable to leave:

I talked to an elderly gentleman at the gym this afternoon. He and his wife spent 2 days trying to get to Mexico. After the second flight cancellation they gave up and decided to spend the Holidays here after all. They're the lucky ones because they live here and aren't delayed in-transit like many others.
Posted by Ted Henkle at 3:17 AM