Book Review: Prayers for the Assassin 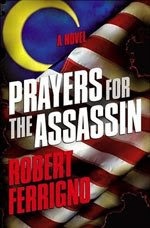 After New York City and Washington, DC are destroyed by suitcase nukes and Mecca is irradiated by a dirty bomb, the US fractures into five separate entities: The Bible Belt, with roughly the same borders as the Confederacy; the Mormon Territories, consisting of Utah and parts of Idaho, the Nevada Free State and the South Florida Independent Unaligned New Area; while the remaining states fall under the Islamic Republic of America. Another American Civil War erupts but unlike the first one, the former United States remains fragmented with an uneasy armistice in place.

This is the backdrop for Robert Ferrigno's Prayers for the Assassin (Feb 2006): A near-future thriller set primarily in Seattle, the capital of the Islamic Republic, 25 years after the "Zionist Conspirators" attack. Events are set in motion when the niece of the Islamic Republic's State Security vanishes and he calls upon Rakkim, an ex-Fedayeen infiltrator--and her lover--to find the girl. Before her disappearance Sarah Dougan was working on a controversial book that casts doubt on the official history of the Zionist Conspiracy.

There were three main complaints about the book: First nearly all the 1-3 star raters felt an Islamic take over of the US to be highly improbable. Second was the author's apparent lack of knowledge of Islam and Muslim society. While the final grievances were based on literary short falls: Shallow character development with a lukewarm plot and tepid action, etc.Meanwhile the other 69 reviewers who loved the book felt the author accurately portrayed an Islamic society set in the not-too-distant future. Many of them said they traveled to the middle east and others seemed familiar with Islamic History.

For starters, I liked the book for the simple reason that such a story's been published. I remember the plethora of "Red Dawn" type of novels that flooded the book stores during the Cold War. Many of them were more far-fetched than Mr. Ferrigno's vision. Now in the wake of the Danish Cartoon Scandal and the Theo van Gogh murder, there's hardly a trickle of similar novels depicting a hypothetical Islamic conquest of America. Mr. Ferrigno deserves credit for at least broaching the subject.

This book will not incite hatred towards Muslims as claimed by one reviewer. On the contrary, I was quite drawn-in by, and sympathetic towards the hero and heroine--both them Muslim. I also thought the author's depiction of the average citizen's devotion to Islam to be very sensitive and deferential. It is the jihadi terrorists of the real world who crash airplanes into sky-scrapers, blow up buses and commuter trains,--rather than a piece of speculative fiction--that incites anger towards the religious-political ideology that spawn such acts.

I found the story itself to be well-written, straight-forward and entertaining: Can Rakkim and Sarah stay alive in order to discover the truth behind the attack that destroyed New York, DC and Mecca? There were several minor plot twists that kept the story from being too predictable. It was also fun to read a book set where I live. The author, a Pacific Northwest Native, struck a fine balance between detail and minutiae, giving the reader just enough detail to paint a vivid picture of the Puget Sound area.

Nor are all the characters cartoonish, "Koran thumpin' fundamentalists" either. The Islamic Republic is also populated by Jews, Catholics and moderate Muslims who maintain the country's deterioration infrastructure. This stratified society is more reminiscent of the Ottoman Empire than the dystopian settings of 1984 and Brave New World. The author lists several of his sources in the Acknowledgments, nearly all of them Islamic. So I'm assuming the "lack of understanding" of Islam is more in the form of splitting hairs on the details. (Islamic men don't wear silk shirts? Who knew?).

I did agree with some of the less-than 4 star ratings. These reviewers pointed out that Europe, with the demographic decline of non-Muslims, is more likely to evolve into "Eurabia" rather than the US--possibly within a generation. Also according to the novel's back story, as Israel was overrun Russia took in the Jewish refugees fleeing the Arab onslaught. I'm not sure it'd be possible for a country that authored The Protocols of the Elders of Zion hoax, would turn around and absorb a people they've spent centuries persecuting. But then again, humanitarian causes were never on the Kremlin's to-do list. Could it be the Russians have ulterior motives for taking in Israeli refugees?

For those who did enjoy the Mr. Ferrigno's work despite real or perceived flaws, you can look forward to two sequels:

Overall I found the book entertaining to read and give it a 4-star rating, not 5, because I found the story more interesting rather than edge-of-your-seat exciting.
Posted by Ted Henkle at 11:45 PM