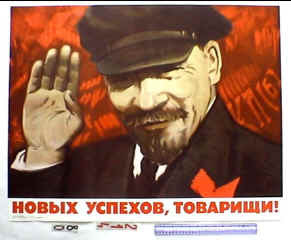 "I've known Comrade Karla for over a dozen years and have always enjoyed his wit and appreciated his in-depth knowledge of history. (Both of which are only superseded by his father). Karla e-mails his friends daily with news articles and commentaries discussing the sad state of affairs plaguing the world today.

In agreement with the good comrade, I decided to start posting some of his most insightful and/or humorous comments on this blog. So without further adue ladies and gentlemen, I present to you, Comrade Karla...

The comments below are in response to Mark Steyn's article: "Mumbai could happen just about anywhere" (28 Nov 08):

Here's what Karla had to say:

"Part of the problem with all of this, at least as I see it, has to do with how you stop this sort of thing before it starts--it seems like too many in the media and politics look at the TV plot model where a successful foiling of a terrorist plot happens when they're on their way to the hotel (or wherever) to do their deed. In fact, for me effective counter-terrorism is blowing them up with a JDAM in the hovel they're meeting in in Pakistan or Somalia or wherever planning the operation--or killing them Mossad style in the hallway to their Rome apartment. If you're chasing them while they're on their way to their target, your intel isn't working.

So if they've already crossed into the US (or more likely are already here) we're already behind the 8-ball. And as we are hamstrung by the law-enforcement model, catching them early on just leads to the Defense Attorney's saying "hey, they were just a bunch of hapless confused immigrants talking, they weren't actually DOING anything." That's just another reason why, absent any special anti-terrorism courts or laws using our standard system isn't going to cut it. We got lucky with the Ft Dix guys but again that was a reactive model and won't work in the long run."

The good comrade is spot-on regarding this.

Over a year ago I read an article in "US News & World Report" describing the problem prosecuting attorneys have in getting convictions for our home-grown, run-of-the-mill violent criminals. It's called the "CSI Effect." That is, juries want to see a state-of-the-art, whiz-bang multi-media demonstration as depicted in the popular crime drama "CSI." Unfortunately most local forensics labs are underfunded, understaffed and don't have the technological gadgets seen in the show. Even if a state forensics lab has such equipment there's a backlog of cases causing lengthy delays. Not to mention defense lawyers questioning the competency of the technicians and sowing the seeds of doubt over the lab's findings. So the "TV Model" is also hampering day-to-day law enforcement. We'll be hearing from the good comrade in future posts!
Posted by Ted Henkle at 9:00 AM