I Know that Sinking Feeling 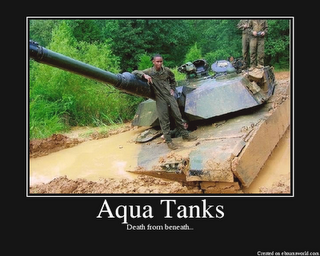 This picture triggered a No-"Crap"-There-I-Was memory. Back in the 90s, I was a BALO (Battalion Air Liaison Officer) for a mechanized infantry unit in Germany for 2 years. In July 94 we rotated in to the Hohenfels maneuver range for our annual field exercise. Just after sundown the day before our big attack against the evil OPFOR (Opposition Forces) it started to rain. And it continued to pour throughout the night.

Despite the weather we launched our offensive on schedule. It was still dark as we tried to keep up with the commander's Bradley in our "track," an M-113 APC (Armored Personnel Carrier). I kept checking my map with a red-lens flashlight to verify our position. We were driving so fast in the darkness I didn't have time to shout a warning to my driver about the creek I spotted on the map--the one we were rapidly approaching. We plunged down the steep bank, into the swirling water and couldn't get out. The stream was wide and deep enough that our treads couldn't get any traction. The commander raced off in pursuit of the OPFOR, leaving us behind.

After a couple of hours, the battalion Sergeant-Major showed up and yanked us out with his track. My team and I then spent the rest of the day racing across the rain-sodden fields trying to catch up to the battle.

At one point we were passing an M-1 tank platoon in a quagmire that, in drier times, was once a dusty dirt road. Two of the armored behemoths met the same fate as the one pictured here. Both of them sank up to the top of their chassis, with gas turbines screaming and treads frantically churning the muddy water--all in vain. They were sunk in more ways than one: Our two recovery vehicles (M-88s?) became mired a couple of hours prior, so there was no telling when they'd be rescued.

I had lost radio contact with the commander long ago, so in order to find him I looked for the vehicles with the flashing MILES lights. (MILES--Multiple Integrated Laser Engagement System, the military's version of Laser Tag). The flashing lights represented vehicles that had "brewed up," as the British would say. So I just followed the trail of destruction.

Unfortunately most of the destruction was inflicted upon us. Our battalion tried evicting the OPFOR from their mountain stronghold and suffered 90% casualties in the process. I guess another 5% of our assets were still stuck in the Fatherland's mud. It looked like a scene from the Huertgen Forest (Sep 44-Dec 45), with "burning" vehicles scattered everywhere on the wooded hillside.

Even if I arrived in time to join the 90% I wouldn't have done any good. Due to the rain and solid overcast all CAS (Close Air Support) missions were grounded that fateful day.Hmmm. Maybe getting stuck wasn't so bad after all.

Or, as Herman Melville may have penned: "My team and I survived to blog thee..."
Posted by Ted Henkle at 11:23 AM