Arms Race within the Ummah 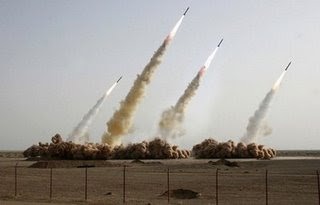 Anxiety appears to be building within the Islamic Ummah (community) over Iran's geopolitical intentions. On 9 July 2008, Iran test fired 4 long and medium range missiles, allegedly capable of reaching "The Zionist Entity" (as Israel is often referred to). The test, pictured here from Dailylife.com, deepened the concern of the US about Iran's motives of its supposedly peaceful nuclear power program.

Israel and the US aren't the only ones concerned.

The Wall Street Journal (WSJ) has this to say on the subject:

A Middle East Arms RaceThe Arabs respond to the likelihood of the Iranian bomb.

Hosni Mubarak is no one's idea of a visionary, but in sensing the Middle East's political winds he has few equals. So when Egypt's president-for-life warned his ruling party last week that "the Persians are trying to devour the Arab states," it's worth paying attention.

The immediate cause of the remarks is a war of words by Iran that led Mr. Mubarak to recall an envoy from Tehran last week. Among other provocations was the recent release of an Iranian film celebrating the 1981 assassination of Anwar Sadat, Mr. Mubarak's predecessor. A Tehran demonstration late last month also called for Mr. Mubarak's execution, on the grounds of his alleged "subservience to the Zionists."

But the broader context of the friction is its steady progress toward a nuclear weapon and the encroachment by Iran into the Arab world -- principally through Hezbollah in Lebanon, Hamas in Gaza and the Mahdists in Iraq. States like Egypt and Saudi Arabia watched with dismay in the summer of 2006 as Israel failed to deliver a knockout blow against Hezbollah. Now they calculate that the U.S. lacks the will to prevent a nuclear Iran. As for Barack Obama's promise of "tough diplomacy," we suspect the Arab states take him about as seriously as they would a tourist who thinks he knows how to bargain at an oriental bazaar.

Little wonder, then, that the Arab states are taking a keen interest in acquiring nuclear capabilities of their own. The latest is the United Arab Emirates, which hopes to sign a nuclear cooperation agreement with the U.S. before the Bush Administration leaves office. Saudi Arabia is seeking a similar deal, while Egypt, Algeria, Turkey and even Yemen are also in the market for reactors.The ostensible rationale for these reactors varies from place to place, from energy-intensive water desalination schemes to reliable electricity supply. Under the terms of the agreement being proposed for the U.A.E. and Saudi Arabia, neither country would enrich its own uranium and both would put their facilities under the safeguards of the International Atomic Energy Agency (IAEA).

Still, it's difficult to see what use oil giants like the Saudis or Algerians would have for nuclear power except as a hedge against an Iranian bomb. IAEA safeguards or not, possession of "civilian" nuclear technology served India and Israel as the crucial first step to getting a bomb. It gave local scientists first-hand experience with the technologies and allowed opportunities for the covert diversion of key nuclear materials. Reports have circulated for years that the Saudis have pursued a secret nuclear program with help from Pakistan, though the Saudis deny this. Egypt has also been cited by the IAEA for undeclared nuclear work.

All this is a useful reminder that the threat of Iran's nuclear programs lies not only in whether it will acquire a bomb. It's also a question of how Iran's neighbors will react. The Israelis have said publicly that a nuclear Iran is an intolerable threat, a view many Arab states share privately. If neither Israel nor the U.S. act, they will be tempted to seek their security by acquiring their own nuclear deterrents. A Middle East in which Iran, Saudi Arabia, Turkey and Egypt have the bomb -- in addition to Israel and Pakistan -- is possible within a decade.

Maybe there's someone at the Council on Foreign Relations who can explain why this isn't such a terrible scenario, what with everyone pointing a gun at everyone else's head. Our view is that this is a recipe for global instability, if not catastrophe, and a reminder of why no one should be complacent at the looming prospect of an Iranian bomb.
Posted by Ted Henkle at 7:47 AM