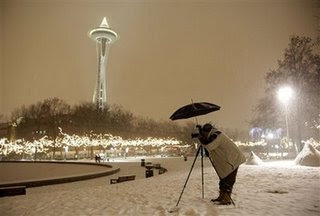 As of today, I've been a Pacific Northwest resident for 10 years. I arrived from South Korea in weather similar to this, with temperatures in the teens. However, that didn't last long as the ice and snow melted within a day or two. While we're surrounded by snow-capped peaks, winters in the Seattle-Tacoma metropolitan area have normally been mild, with temperatures rarely dipping below freezing. So our winters are usually gray, rainy and dreary. Snow, when we do get it lasts no more than one to several days.

This December's been different. In the 10 years I've lived here I don't remember getting this much snow for so long, not to mention the below-freezing temperatures. I've been wearing sweaters that haven't been outside my closet in years!

Our current weather issues are expected to continue through Christmas. While the expected near-hurricane force winds didn't materialize, the snow has been playing havoc with airline travel. Sea-Tac Airport is now a virtual refugee camp as incoming flights dump-off condemned travelers with little or no chance of an outbound flight.

The picture above, taken from Yahoo News, is the Seattle Space Needle at City Center.

Here's the latest from the Seattle Times: