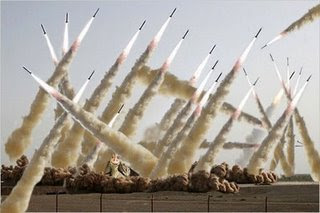 A few days ago I posted "Arms Race Within the Ummah" on this blog and on the Consimworld Social Network. The accompanying article described the growing anxiety of the Egyptian and Saudi Arabian governments over Iran's nuclear power program. For an attention grabber, I added a picture of the missile test launch Iran conducted this past summer. However, one astute reader on the CWSN commented that the photo in question was the subject of a controversy: The Iranians apparently photoshopped one or more missiles into the picture than was originally launched.
So today I thought I'd "come clean" and instead of perpetuating an Iranian disinformation/propaganda campaign, I'll continue the running joke about Iran's photoshop expertise (or lack thereof).
The above, over-the-top, eye-catching photo can be found at What the Crap?:
http://whatthecrap.wordpress.com/2008/07/09/photoshop-images-of-irans-missile-launch/
As an additional treat, can you spot the Star Wars character within the launch plumes?
Posted by Ted Henkle at 3:00 AM