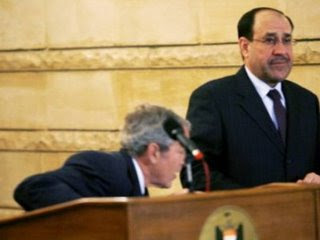 Muntafar al-Zaidi's 15 minutes of fame is going into overtime in the Arab world. His folk-hero status initiated a bidding war for the size 10 shoes he chucked at President Bush during his impromtu visit to Iraq.
One reader of Mark Steyn's website came up with an idea to finance the economic bailout plan:
"Payless Shoe Source [Mark Steyn]An enterprising reader suggests a way to kill two birds:
On the way to work a few minutes ago I heard on the radio that Muntazer al-Zaidi, the Egyptian who threw his shoes at Bush a couple of days ago during a news conference, is still in jail. But he’s being celebrated as a hero throughout the Arab world. One man offered his 20 year old daughter to the shoe thrower. Another Egyptian offered 10 million dollars to buy the shoes.And then it hit me!Let’s ask the President to allow 100,000 Arabs to throw shoes at him one at a time or all at once – with pre-arranged sales contracts such that each pair is then sold for $10,000,000! And any shoe that hits Bush goes for $100,000,000!That would come to at least one trillion bucks! Enough for the bailout!
Ingenious! Baathist symathizers and Washington Post writers seem to enjoy the idea of shoes being hurled at Bush, and the President seems awfully sporting about it, so let's make it the geopolitical version of those soak-the-selectman/pastor/principal booths they have on Old Home Day in New Hampshire.Also, while we're thinking outside the box, if those fellows offering their 20-year old daughters to the shoe hero were instead to offer 53-year old UAW members, we could skip the auto bailout, too.
"Here's a news clip and article about "sole" affair from the BBC:
http://news.bbc.co.uk/2/hi/7782422.stm
Posted by Ted Henkle at 11:46 AM